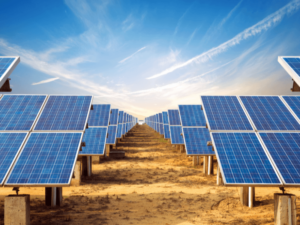 Solar power is, in many ways, the most obvious source of energy for a renewable planet because the sun will always shine. Since sunlight is necessary for human survival, it seems logical to extract as much energy from it as possible. It’s also crucial to note that photovoltaic (PV) systems, which convert the sunlight that enters a building into electricity, are becoming more and more common in both residential and commercial structures. In actuality, a single hour of sunlight is sufficient to supply all of the world’s energy requirements for a full year.

Buildings that harness solar power use solar cells that are made from silicon and similar materials. These cells have the ability to convert sunlight into electricity. In some cases, solar panels on a house can make it completely self-sufficient in terms of electricity. In other cases, large solar farms can help generate even more electricity. Solar power is also a clean form of renewable energy that won’t have any adverse effects on the environment if the PV systems are properly manufactured.

However, the high initial costs of solar power have prevented it from being the generally chosen source of electricity. PV system installation is expensive, regardless of whether it is a small solar panel installation on a home or a large solar farm. Even with the long-term promise of decreased energy costs and governments offering tax incentives and rebates, it’s not simple to persuade every homeowner to make such an investment. There is also the challenge of positioning solar panels in such a way that the amount of sunshine received by a specific region is maximized.

Theoretically, solar energy could be used to power most structures. But, we’d need to consider the initial cost of installing a PV system on each building on a global scale. And let’s not forget that it would take time for the majority, if not the entire world, to switch to solar energy as the main source of electricity for all private households and commercial buildings. As a result, solar energy is a fantastic but logistically complex and pricey solution. 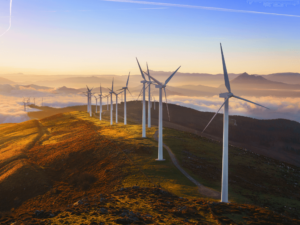 Most people should be somewhat familiar with wind power by seeing large turbines or wind farms. Wind energy, like solar energy, can occur on a variety of scales. A single wind turbine could potentially power a small building, whereas large-scale wind farms could allow a utility company to supply electricity to thousands of customers. The technology is similar to that of gas-powered generators, except that the wind moves the turbines and generates electricity.

Another similarity between wind and solar energy is that wind power is a clean renewable energy source. It can generate electricity without emitting harmful gases into the environment, such as carbon dioxide. Plus, numerous locations around the world consistently receive high levels of wind, allowing for the development of wind farms that can generate massive amounts of electricity that can be distributed to large areas of land. Interestingly, these technologies have been around for decades, so it’s a matter of implementing them rather than developing them.

That being said, there are some drawbacks to wind as a renewable source that prevent it from becoming the most common form of energy. For example, some people will complain that large turbines and wind farms are unsightly and aesthetically unappealing. There is also a threat to birds and other wildlife, not to mention noise pollution. Also, large-scale wind energy would require transportation lines capable of transmitting the generated electricity to many areas in need. Again, similar to solar, this increases the initial costs of developing wind into a viable and common form of energy for a renewable planet. 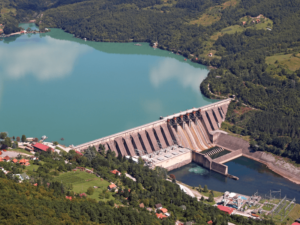 The immense power of water should be nothing new to most people. For decades, dams have helped to harness the power of water in a manner that’s similar to wind energy. The only difference is that water is being used to spin the blades of a turbine to create electricity. Rivers, waterfalls, and other forms of fast-moving water can be used in this capacity to generate electricity. In fact, hydroelectric power has long been the most common form of renewable energy in the United States, albeit with wind and solar gaining traction.

Much like solar and wind, hydroelectric power can be generated at various scales. The Hoover Dam, for instance, is a significant illustration of how water has been utilized to produce electricity for both public and private enterprises in three distinct states. There are also examples of smaller rivers or streams being used to generate electricity for a smaller area. Further, hydroelectric electricity is far cleaner and more environmentally beneficial than the majority of current power generation techniques because it is devoid of greenhouse gases and other hazardous compounds that have led to today’s climate change issue.

Of course, hydroelectricity is far from perfect. Large dams frequently redirect water in a way that can occasionally limit both human and animal access to water, making them more vulnerable during droughts. Additionally, they have the power to shift water levels, possibly affecting entire ecosystems and aquatic wildlife. In this regard, it is vital to regularly monitor the effects of dams on ecosystems to ensure that no new issues are being created. It goes without saying that producing clean, renewable energy is desirable, but not always at the expense of ecosystems, which are necessary to keep the planet’s equilibrium in check. 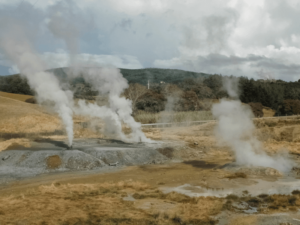 There is a potential source of renewable energy lurking beneath the earth’s surface. The heat from beneath the earth’s crust escapes when volcanoes or geysers erupt. This heat can be captured by bringing heated water and steam to the surface and using it to power turbines and generate electricity. If that steam and hot water can be pumped back into the earth, geothermal energy becomes renewable and clean. Because most of this occurs beneath the surface, geothermal energy does not require large plots of land, as wind and solar farms do.

Of course, there are some disadvantages to using geothermal heat. To begin with, it is not something that can be done everywhere. Some areas are rich with geothermal potential, while others may not have much. Earthquakes and other natural disasters can also disrupt or damage geothermal energy infrastructure. That infrastructure is also expensive, which is why some areas where geothermal energy would be feasible have not attempted to harness its full potential. However, in certain geographies, geothermal energy is a viable source of energy that can power a large population while also contributing to a more renewable planet and securing human continuity. 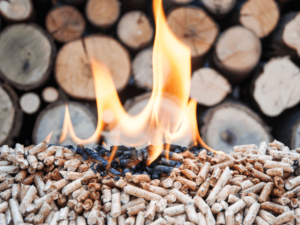 Anyone who has ever burned wood in a fireplace has used biomass to generate heat. Essentially, biomass is a type of renewable energy that generates energy from any type of organic matter. Naturally, the definition of “biomass” is broad. It can include the burning of wood, crops, animal carcasses, and a variety of other things. The steam produced by burning organic materials can power turbines, making this a renewable source of energy.

The greatest advantage of biomass as a renewable energy source is that it can be extracted from almost any organic material. Organic matter that would otherwise be thrown away and end up in landfills, for example, might be burned and converted into energy. Other types of organic waste, such as manure, can also be considered biomass. Theoretically, converting biomass into a renewable form of energy would be an excellent method to utilize organic waste or garbage.

However, the technology needed to turn biomass into energy hasn’t been developed to the same extent as other renewable sources like wind, solar, and hydroelectric. We’re still a long way away from making the burning of biomass similar to burning fossil fuels in scale, productivity, and efficiency. This is why biomass still makes up a small fraction of the total energy generated in the United States every year, making it easy to overlook compared to the other methods of renewable energy. 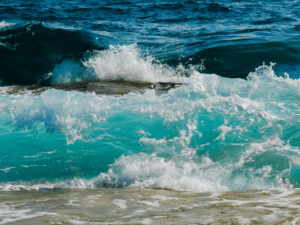 Although frequently disregarded, tidal power is a form of renewable energy. After all, unlike the other renewable energy sources mentioned, the tides rise and fall with predictable regularity. Tidal power harnesses the ebbs and flows of the planet’s natural tides to generate energy from heated surface water. Tidal power has enormous potential due to the predictable nature of the water and the fact that many large cities are situated close to ports and oceans.

Naturally, it will be impossible for inland communities to utilize tidal power. Tidal power is clean yet can potentially disturb natural ecosystems, much as hydroelectric power. Large machinery would have to be installed to capture the energy, which may ruin the aesthetic attractiveness of locations near the coast and disrupt the fauna. Severe weather could also reduce the quantity of power generated, removing the predictable and dependable character of tidal power. Needless to say, these drawbacks have played a significant role in tidal power not being a more developed and feasible kind of renewable energy, yet it should not be ruled out in our quest for building a sustainable planet.

So, now that we have an understanding of the six main renewable energy sources at our disposal, which is the best moving forward?

Obviously, this is a multi-faceted question, and the answer will depend on different governments, budgetary policies, and leaders coming together to develop a global solution.

Rather than hoping for the best, we’re doing our part to raise awareness of this issue and bring together global leaders who can effect change and develop low-carbon technologies.

Want to discover more information on this issue? Contact us today or check out our Resilient Renewable Planet Conference that will take place in April 2023. Government representatives and private sector leaders will collaborate at this conference to identify challenges, exchange ideas, and choose the best course of action for creating a sustainable planet. Join us. 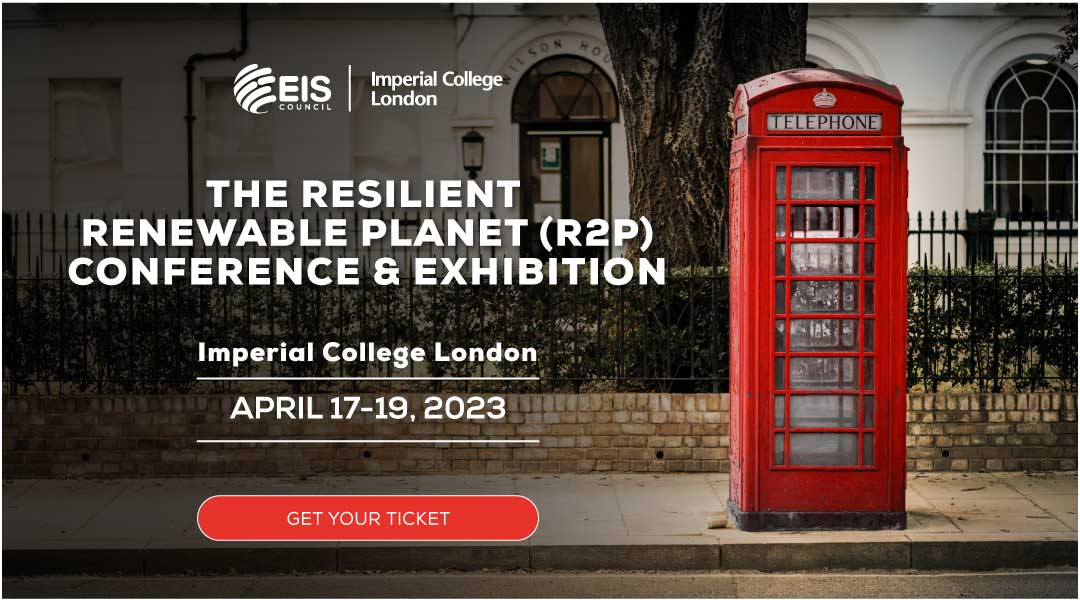